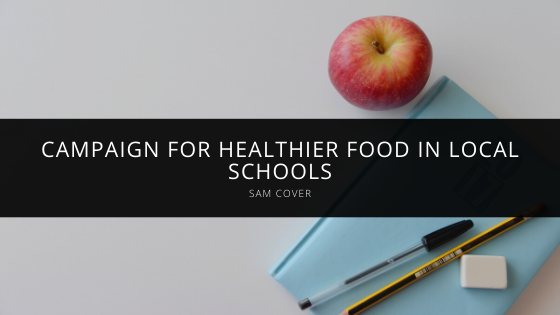 An award-winning chef and an outspoken proponent of the popular farm-to-table movement, recent culinary trends embraced by Sam Cover have included utilizing alternative proteins and sourcing only local and hyper-local ingredients. Combining these areas of interest, chef Cover is now set to campaign for healthier, locally-sourced produce in schools across Spokane County, Washington.

“In an effort to reduce environmental impact, it’s vital that we all do our part in trying to source food, drink, and other essentials locally, wherever possible,” says Cover, an award-winning chef born and raised in Spokane County.

What’s more, Cover is keen to instill this notion into a new generation and to promote the utilization of alternative proteins. “Where better to start than in Spokane County’s schools?” adds the Pacific Northwest native.

By campaigning for healthier food in the region’s schools and simultaneously championing the benefits of local and hyper-locally-sourced produce, award-winning chef Sam Cover believes he’s spreading an incredibly important message. “We’re not only supporting a greener environment, but we’re promoting healthier lifestyles among kids in Spokane County and surrounding areas,” suggests the chef.

It’s a model which Cover says he’d like to see in schools across the U.S. “Similar campaigns have already been incredibly successful in Europe and elsewhere around the world,” he reveals, “so why not in America?”

Sam Cover plans to begin his campaign as soon as possible, alongside the launch of his new restaurant in downtown Spokane. Launching soon, the establishment promises what Cover calls upscale comfort, and will specialize in alternative proteins and local and hyper-local produce. “I want to use my platform, both as a chef and as a local business owner,” he adds, wrapping up, “to get the message out there, for the good of the environment, and for the health of a new generation in Spokane County alike.”

Born and raised in Spokane, Washington, renowned chef Sam Cover has made a name for himself in the Pacific Northwest’s thriving restaurant and luxury catering scene. Cover has also managed teams in some of the nation’s most highly regarded restaurants and hotels from Los Angeles to New York City. To date, Sam Cover has enjoyed more than two decades of fast-paced life as a chef, winning multiple awards for his food in the process, and shows no sign of slowing down as he prepares to open a brand new restaurant in spring 2020.